Lola (just Lola) is a dynamic blues and R&B singer/keyboard player who has been igniting stages in the Atlanta area and beyond as a national and international artist. Blessed with a deep soul voice, a funkified keyboard style and an intense, high energy stage presence, Lola combines traditional blues with hard-edged R&B to create her own brand of contemporary, tough music.  Lola is honored to be named among  "Atlanta's Queens of Blues" along with the dynamic Francine Reed and Sandra Hall.  Atlanta Council Member Kwanza Hall presented the ladies  with a proclamation naming September 29, 2013 Atlanta Queens of Blues Day in Atlanta!!

Lola was born in the back seat of an Olds 98 in New York and grew up as a "military brat" in Oceanside, CA before her parents moved to Mobile, AL. It was there that she began sitting in with her father's funk band, playing trumpet and drums before switching to keyboards. Stevie Wonder, Donnie Hathaway, Jimmy Smith and Joe Sample were her key piano influences, along with her father's favorite, bluesman Amos Milburn. She worked her way through college playing in three different Mobile churches, absorbing a huge dose of gospel influence that you can hear every time she sings. Her other vocal inspirations include Aretha Franklin, Bonnie Raitt, B.B. King and Stevie Wonder.

Finishing college, Lola won a berth as a keyboard player with the late soul great Johnnie Taylor, touring across the country and learning first hand how to work a crowd into a frenzy.

In 1996, after winning a nationwide talent contest on BET television contest, she was signed by Andre Harrell to a Motown recording contract, but the album remains unreleased since Harrell's departure from the company.

Since striking out on her own as a band leader, Lola has shared the stage with The Pointer Sisters, Bobby Womack, Bobby "Blue" Bland, Betty Wright, Chubby Checker and countless other international artists. Now she's captured the spotlight herself.  With her firebrand stage presence, a heap of original songs, high powered keyboards, a tight band and, most of all, her deeply soulful, rich and powerful voice, Lola is a major figure on the national blues scene. 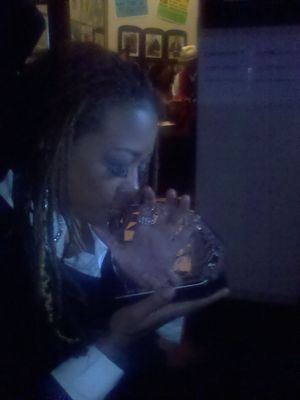